- The Duke of Wellington -

Arthur Wellesley, the now Duke of Wellington, was given command of a new allied army of British, Anglo-Netherlands and Prussian troops. Wellington was far from impressed by the quality of troops under his new command, much of the quality British troops were lost to the American War of Independence campaign and the Netherlands troops were either ex allies of the French or inexperienced in battle. But with typical stubbornness and very harsh,brutal discipline The Duke of Wellington forced his new command into an effective organisation, gaining a vital victory against the French General Ney at the battle of Quatre Bras 16th June 1815 (which had severely worn down the experienced and hard to replace quantity of French troops available to Napoleon).

Arthur Wellesly returned to Britain a national hero, while Napoleon Bonaparte was exiled for life on the remote island of St Helena. Returning to politics as his secondary career, his popularity propelled him to the position of Prime Minister 1828-1830. However he was not a successful leader of Government and he resigned office after two years mainly due to his opposition over voting reform (or indeed any reforms),his support for Catholic Emancipation 1829 and threat of Mob rioting against his leadership.

The Duke of Wellington later served under Sir Robert Peel (Prime Minister) as a minister of portfolio. In 1848 Arthur Wellesley again showed his contempt for the civilian population masses and as Commander in Chief of the British army arranged a military force to prevent any Chartist action within London.

The Duke of Wellington died in 1852, a few years before the Crimean War conflict 1854-1856, and was buried within St Paul's Cathedral. 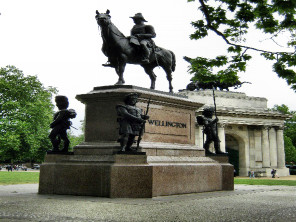