Horatio Nelson was born 29th September 1758 the son of a Norfolk clergyman from where he gained his strong religious beliefs.

A midshipman he joined the British Navy at 12 years of age serving aboard HMS Raisonable and after expeditions to the Arctic and duty in the East Indies Nelson was made acting Lieutenant of HMS Worcester 1776 and Lieutenant of HMS Lowestoft 1777.

During the American War of Independance 1775- 1782 at the age of twenty Nelson became Commander of HMS Badger.

In 1779 he was to become Captain of HMS Hitchingbroke and became involved in an expedition to Nicaragua against the Spanish who had joined with France in support of the American Colonies.

After a period of ill health, Nelson commanded HMS Albermarie in North America where here remained until the American victory, later he served aboard HMS Boreas in the West Indies where he attempted to suppress trade with the new Americans free colonies. At this time he married Francis Nesbit in 1787.

Without a real war to fight, Horatio returned home and lived for five years in the English countryside supported by a half pay retainer payment from the British Navy.

With the outbreak of war with Revolutionary France declared 1st February 1793, Nelson returned and commanded HMS Agamemnon serving with distinction under Admiral Hood in the Mediterranean, blockading the coast of Italy and preventing the French from securing Corsica.

In 1794 at the seige of Calvi Nelson lost his right eye sight to enemy shot and distinguished himself in subsequent actions, in 1795 he was promoted to Commodore.

Aboard HMS Captain in 1797 Nelson served under Admiral Jervis during the battle of Cape ST. Vincent where the British fleet engaged a much larger Spanish fleet, but were ultimately victorious due to superior tactics.

Here Nelson manoeuvred his ship out of formation line to attack a group of Spanish vessels. He took by force four as prizes, and himself led a boarding party that captured two of the vessels along with an array of Spanish officers. For this action Horatio Nelson was promoted to Rear Admiral of the Blue, awarded the Knight Commander of the Bath and given the honorary rank of Colonel of Marines.

In an action at Santa Cuz (to take a Spanish treasure ship) during July 1797, Nelson was wounded and his right arm amputated. By April 1798 he returned to duty aboard HMS Vanguard and commanded a squadron of other ships with the orders to search and destroy the French Fleet of Napoleon Bonaparte known to be somewhere in their Mediterranean ports.

Leading the squadron HMS Vanguard lost her masts in a fierce gale of Sardinia and by the time they were repaired the French fleet had already sailed from their main port of Toulon.

Nelson had to guess where the French fleet would be located, and with the fall of Malta felt that they were headed toward Egypt. Replenishing supplies in Sicily Horatio sailed toward the eastern Mediterranean and contacted the French fleet at Aboukir Bay on the Nile in August 1798.

Nelson was slightly wounded in the head, but defeated the French fleet thus furthering his meteoric rise to legendry British Naval hero in the ' Battle of the Nile'. [ More] 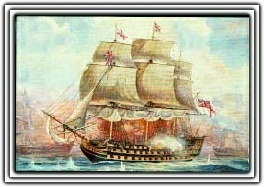