Twmbarlwm - Haunt of the the Celts.

A local legend says that if anyone dares to disturb a small burial mound atop Twmbarlwm mountain and near the Iron age hill fort enclosure of the Silurian Celts, then they will incur the curse of Bran and will be attacked by swarms of bees. Bran (Raven) the Fisher King was a local chieftain buried within a small cairn mound during the Bronze ages.

To the west end of Twmbarlwm Iron age hill fort (constructed around 500 BC and which was a major part of the 25 year defence struggle against Roman conquest) a larger raised circular mound was the base of a later Norman motte and baily timber castle making use of the excellent defensive position around the 12th /13th centuries AD.
From here the Roman military base and docks at the town of Caerleon can be seen and the site of the King Arthur Legend (the Roman Amphitheatre)

In our book production Caerleon Cup of The Carpenter Twmbarlwm overlooks the Fisher King, King Arthur, and Holy Grail of Legend. 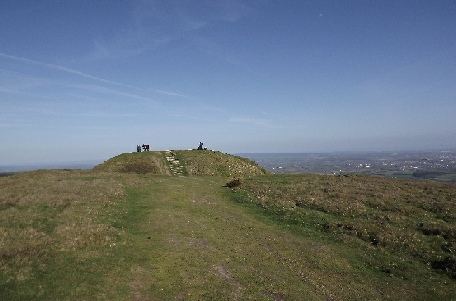