Napoleon Bonaparte - Emperor of France - The dictatorship - Invasion of England

With political intrigue rife within Europe, the French Senate sided with the one who would be most likely to secure France's stability and interests. They were encouraged (under fear of their own lives and interests) to officially declare Napoleon Bonaparte Emperor on May 18th 1804.

After marrying Josephene in a private ceremony (to please the Pope, who would traditional crown the French Monarch thus confirming his authority given from God). Bonaparte was crowned on December 2nd 1804 after being anointed by the Pope, but Napoleon placed the crown upon his own head.

By 1805 Napoleon had assembled a substantial fleet of barges on which he planned to transport his troops across the English Channel. The British frantically attempted to delay Bonaparte's immanent French invasion of the British Isles by the means of political dialogue with Russia and Austria, with the aim of creating yet another military coalition that would create an alternative military front and threaten French controlled territory.

Napoleon Bonaparte reacted with his customary quick thinking, and affirming his assumption that he himself was a greater military leader than anyone in Europe ( using the term ' I shall ' ) announced to his Generals that his army would invade Germany.

' I shall stop the Austrians and Russians from uniting!' he declared. ' I shall beat them before they can meet!' 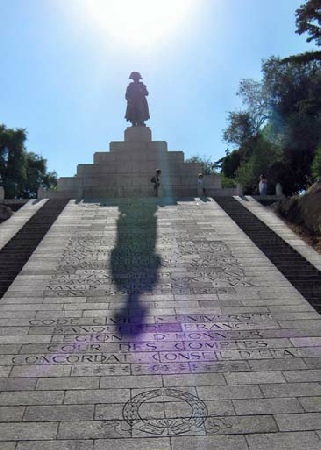