The next year 1800, Bonaparte returned to military aggression and attempted to both regain lost territory for the French and secure his political position.

He again invaded Italy via the Alps, where Napoleon defeated the Austrians at the Battle of Marengo,

( but due to lack of Naval superiority he could not decisively defeat the Second Coalition, as the Russian Black Sea Fleet still retained enough power to freely raid French interests. To follow this in 1801 the British Admiral Horatio Nelson had defeated a Danish fleet at Copenhagen that Napoleon had hoped would stop the British Navy from entering the Baltic sea).

A further battle at Hohenlinden crushed the Austrian army and brought about the peace treaty of Luneville (in which Austria, Russian and The Kingdom of Naples recognised French controlled territories in Holland, Italy and up to the banks of the Rhine river).

With success on land ( but not the sea, which was to be his eventual downfall), Napoleons hero status within France and above all with the whole French military forces was secured.

The Second Coalition against France collapsed and the British (unable to carry on the fight without allied military and financial support) in turn sought peace and signed the Treaty of Amiens (1802), recognised the French Republic, and agreed to withdraw and return the French territories that Britain had taken.

France for her part, agreed to withdraw the French army from Egypt and most of Italy, and along with many other concessions and agreements, remove forces from the army camp that Napoleon had assembled at Boulogne ready for an intended invasion of Great Britain.

Neither parties could resist political and power base manoeuvring, with the British occupation of Malta as the catalyst, in 1803 the Treaty was cast aside and Britain again declared war on France.

Napoleon Bonaparte immediately again prepared and strengthened his invasion camp at Boulogne and prepared his Grand Armee for an assault over the English Channel against Great Britain, who now stood alone against the greatest military power in Europe. [ More] 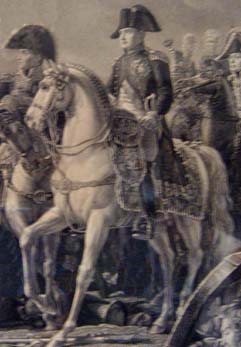