In attempting to crush the Revolutionary French Directory and it's power base, Britain was to attack via Holland, Austria was to attack via Italy ( supported by The Kingdom of Naples), Russia via Switzerland and Turkey (engaged with Bonaparte) via Egypt with British Naval assistance.

The French Directory in the mean time had created discontent within Europe in anyway it could, supporting the use of spies, rabble rousers (to create rioting and anti public feeling against administrations) and it supported known subversive groups.

The Directory also deported the Pope to France, occupied Switzerland, exiled the King of Sardinia-Piedmont, attacked the Kingdom of Naples and seemed to be on the verge of casting all Europe entirely under the French spell of Revolution.

But with a successful series of military assaults of the Second Coalition, all the French Directory efforts to dominate Europe now seemed in vain as the French military lost much of the ground that Napoleon had secured, and were pushed back from Italy and Switzerland.

With every defeat abroad came more and more discontent at home for the French Directory (which was noted by Napoleon Bonaparte as he always kept himself well informed of events unfolding within Europe). And in August 1799, Bonaparte returned to Paris from Egypt seeking to take advantage of the fragile political situation and peoples displeasure at the Directory.

Napoleon quickly seized power by force of arms,abolished the Directory,established a French consulate (three people were to hold equal executive power to avoid a single leader, as consuls had done in ancient Rome) and Bonaparte taking his first tentative step toward his goal of becoming a dictator to the nation, eventually declared himself as ' First Consul' above all others (virtual dictator) and due to his popular support by the people was later declared ' First Consul for life' (in 1802).

He was now the most powerful man in France and the most feared in Europe. [ More] 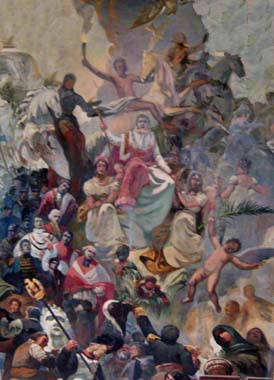 Napoleon Bonaparte
First Consul for life abolition of the Directory