The man who cast a long shadow over the history of Europe.

Napoleon Bonaparte (Napoleone di Buonaparte his original Italian name) was officially born 15th August 1769 within Ajaccio, the capital city and main port of the island of Corsica to his mother Letizia Bonaparte.

The young Bonaparte was one of a large family consisting of an elder brother Joseph, and the younger Lucien,Eilsa,Louis,Pauline,Caroline and Jerome to a fairly poor but noble family of Italian origin,whose father Charles (changed from the Italian Carlo to sound more French in troubled times – as was Napoleons) was a respected lawyer, having friendly contacts with both the Corsican Nationalist movement and the French authorities under which he served as a municipal councillor.

(he was also not particularly good at the French language) but this ability with numbers allowed the boy to enter military school in France and made him all the more anxious to prove to himself and the world at large that he would become a success.

Napoleons own friendship with the mayor of Ajaccio and his fathers contacts also allowed the fifteen year old to attain the military education that he aspired to. Napoleon moved to France in 1779 and was educated in the French language at a religious school,within a few months he moved to a military academy at Brienne le Chateau to seek a career within the Navy.

Here the not to academically bright Napoleon Bonaparte suffered abuse at the hands of bullies and was ridiculed as he still retained a strong Corsican accent.

In 1784 after passing out of Brienne le Chateau,Bonaparte moved to Paris and entered the Ecole Militaire,in a change of direction he now trained to become an artillery officer. His father died suddenly, and with his death the income to which all new recruits required was drastically reduced, forcing Bonaparte to complete his  first real challenge in military life,he passed his two year course within one year. [ More] 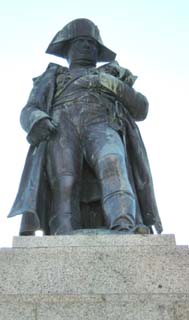