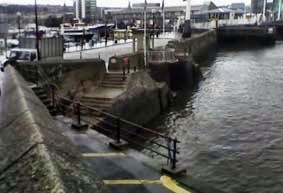 Plymouth where the Pilgrim Fathers walked down these steps down to set sail in the Mayflower.

Prince Madoc a Welsh prince who sailed to America in 1170, over three hundred years before Christopher Columbus's voyage in 1492.

The idea of Basic Human Rights For Everyone emanated from an insane selfish writer whose musings on society caused the French Revolution and social change. At least that was the French Aristocracy's personal opinion of the man. Each to their own opinions, and why.