My participation in war started at a very young age in Silesia Poland. Both my parents were active resistors against the German occupation during the Silesia uprisings and while I was young baby grenades pistols and ammunition were hidden under me as I lay in a push chair which my mother pushed past checkpoints to deliver the weapons to other resistors.

One day as my mother was alone, the door to the house was smashed open and two German troopers barged in, presumably effecting a random search. They pushed her aside and searched the house. My mother was distraught. Mainly because moments before she had hung her coat in a wardrobe and suddenly realised she had not hidden a pistol which still lay in the pocket.

One of the German's opened the wardrobe door and rummaged through all the pockets of the coats hanging there. He turned to my mother, apologised for the intrusion and walked out the door along with the other German who had also found nothing of interest. My mother shut the door, watched the Germans leave to search the next house and then

He was eventually freed, but only after a local prominent German spoke in his defence and said in many letters that the family were good people and had only treated their German and indeed all neighbours with kindness and helped in their hours of need where other German neighbours had ignored them. They freed him and delivered him back to the family house. He was thin, dishevelled and obviously been physically beaten. It was only after the war he told us his story. He had been warned. One word as to what had happened and what he had seen. All the family would be taken.
One of my younger brothers still in school also suffered. It was announced only German was to be spoken and read, not Polish. He answered in Polish and was badly beaten and threatened. He told my mother nothing of why he had crawled home in that state and spoke nothing but German until the end of the war, enduring nasty comments from his friends and indeed the family. Only then would he tell his story to the family and spoke no German after that.
The family laid low and started again the resistance activities and connections that they had during the previous uprisings, also taking in Jewish friends who sought to flee the occupied area. It was with great concern then, that I was suddenly summoned to the German military offices without any indication as to what it was about.  {Next}

opened the wardrobe door herself. The pistol dropped to the floor. It had slipped from the coat pocket and dangled on the coats sleeve button. An eventuality that saved both our lives that day.

After the uprisings and growing up in Silesia that had now become part of Poland free from German control, I flew gliders and joined Officer cadet school. Unfortunately happiness came to a sudden end with the Nazi German Invasion in 1939.
All we cadets were given five rounds of ammunition and ordered to destroy the records of the officer school. The Nazis would have found the records most useful if they had been captured. We were all sent to the front, where the five rounds were well spent. But as fate has it, we were all forced to disband and carry on the war as best we could as the army fell as did our country.

I went home as did my brothers also in the army. There was no way out as the Germans had overwhelmed our area too quickly. Germany considered Silesia part of Germany and were not too quickly persecuting people at this time, as they considered the population German, under Polish occupation. This kept a great many of us alive.
My brother was quite fortunate in this respect. He witnessed Germans rounding up Jews and beating an old man before they threw this gentleman into a truck. He confronted the German officer in charge and gave him a piece of his mind. ‘Is this how the great German Army wins wars? Beating on old men, women and children!’
The German officer ordered his men to stop beating the prisoners. But that night the Germans came and took my brother away, they imprisoned him in Belsen concentration camp. 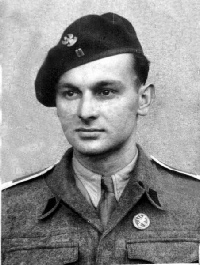