Originally called The Pelican and renamed The Golden Hind before returning to Plymouth from Drakes first epic voyage. The Ship's name stems from the Old English word meaning female Deer and the emblem was featured on the Hatton family coat of arms. (Christopher Hatton courtier to Queen Elizabeth I and councillor, being the principle sponsor of Drakes first voyage around the World. Queen Elizabeth I incidentally, invested some £2000 also). The Ships Latin motto Virtue is the safest helmet - Cassis Tutis Sima Virtus is taken from the same coat of arms.

Francis Drake (1540-96) was the first English Sea Captain to circumnavigate the globe and did it aboard his ship The Golden Hinde. Other ships under his command in the voyage were the Elizabeth Of London (A Pinnacle which turned back), The Benedict, Marigold (Lost near Cape Horn) and Christopher (Sloops) all remaining ships scattered. Total crew members around 114. Setting out from Plymouth on 15 November 1577. He returned on 26 September 1580 with a fortune in valuables worth £600,000 during 1580 (around £25 million today) of which Queen Elizabeth I took a huge share (50%) which equated to twice the cost of fighting the Spanish Armada in 1588. The Royal Treasury was free of debt in the year after Drakes return and the adventure made Drake the most famous sailor in the World. Much to consternation of the Spanish whose West Coast of South America possessions he had plundered on route,he was knighted Sir the following year April 1581.

Later Sir Francis Drake,now vice Admiral of The English Queens Navy and aboard the warship Revenge, took possession of the Spanish Armada's Andalusian flagship Rosario and also the 50,000 gold ducats the ship carried. This time most of the purse vanished and Drake was suspected of falling short in his duty to share the prize to the crown and other sea captains and ultimately tarnished his reputation. [ More] 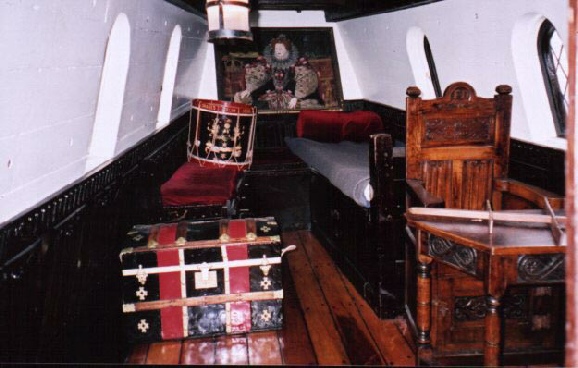