The Apollo Moon Landing episode is :-)

"The greatest week in the history of the world since Creation." 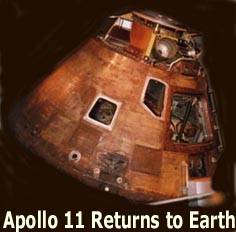 This is the modern world

What will humanity take to the moon and Space, the Universe, The stars. Religion. Dictatorship. Democracy. Atheism. Corporate expansion. If alternative beliefs cannot be reconciled on Earth what is the actual purpose of taking these problems out to other planets. Saying ‘We come in peace’ to an intelligent Alien life form would be a direct lie, as humanity cannot even decide what Peace is itself. Spending Billions on exploration has no purpose if humanity itself serves no other purpose other than continual War and argument also the pollution and destruction of its own Planet and environment caused by ‘progress of scientific discovery funded by profit making enterprises ’. Global warming is humanity made by promoting profusely the use of invented items for profit, then blaming the individual customer for its actual use. Sad business. The Star Ship Enterprise from the TV series Star Trek would probably have been sponsored by a private profit making service searching for new customers not a Unified Federation searching for peace.

by Democracy competing against Communism during the Arms race of the sixties.

Amazing how much could be achieved just because of the need to win. Or destroyed.